Essaouira (formerly known as Mogador) is a port city in the vibrant country of Morocco. Essaouira is a city mainly consisting of beaches and a Medina, an inner walled city, which gives it a very pleasant and laid-back feel. The city itself is famous as the 'Windy City' because of the large amount of seaside wind it gets from being a port. Besides being one of the most beautiful cities of Morocco, it also serves as the main poirt of the country, whcih makes it lively year-round. To see the full extent of the liveliness of the city, You must visit Essaouira when it celebrates the world music festival. The festival serves as the crown jewel of the city's love for music and its incredible music scene. The beauty of the city is not lost on the world as the city was deemed as a World Heritage Site by UNESCO. The picturesque scenery of the beaches and the city itself makes it a paradise for artists, and the welcoming nature of the populace, the vibrancy of the city and the relaxing atmosphere makes it a much desirable city for everyone out there. Essaouira is a cool step away from the fast-paced life and presents the perfect place to relax and take in nature with its windy embrace.

Moroccan Arabic is a specific dialect of Arabic that is the common vernacular in most of the area.French is spoken in many of the places as a preferred second language by the natives due to the French influence in the culture of Essaouira. It enjoys the status of a prestige language. 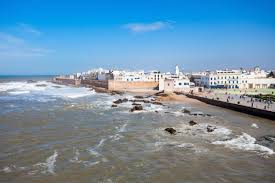 June,July,September,November,DecemberJune is one of the best months to visit as it sits in the heart of the tourism high as well as being on the sunny side of the year.July begins with one of the biggest tourist turnout and is the warmest in the year. July is famous for the festival week which makes it the busiest all year roundSeptember is when prices start to fall and the weather remains dry. the early fall weather is dry and the crowds are dispersed.November is the cheapest time to visit the city. the prices are at an all year low and rains are just starting.December is the other busiest time of the year due to another annual festival drawing crowds from all over. the prices are high and the weather is rainy.

February,March,OctoberFebruary is a month which is good to visit in due to the colder weather and light rainfall.March is a month when the weather starts to warm up and the rains are a little lighter. It also boasts being one of the lowest cost inducing months.October is the month during which the monsoon really picks up and the rains increase. it is not as wet as November but preceding it,thus being wet.

January,April,May,AugustJanuary is quite needlessly expensive as it follows the price hike of December and does not provide much for tourists to do. it also has a low temperature and rainy weather.April again factors in rise of prices without sufficient events to back it up. the weather is receding monsoon, so rain is also unpredictable.May sees a rise in both temperature and rainfall, making it a humid environment which makes travelling uncomfortable. The city also sees a lull in almost all notable events and gatherings during this time.August is one of the worst months to visit because of the unwarranted second highest price surge of the year and a start to the monsoon season, combining the worst of humidity with a high price for everything.

Moroccan Arabic is a... Read more Moroccan Arabic is a specific dialect of Arabic that is the common vernacular in most of the area.French is spoken in many of the places as a preferred second language by the natives due to the French influence in the culture of Essaouira. It enjoys the status of a prestige language.

Taxis cost on an average 7-8MAD as a base fare or for short distances. The prices are usually haggled beofre sitting in the taxi.

The nightlife in Essaouira is quite limited due to the avoidance of alcohol. There are bars and establishments that serve alcohol but they do not extend into the night as most other cities. You can enjoy inexpensive beers and appetizers along the beach watching the calming waves and in company of friendly locals or like-minded tourists and is a nice place to strike up a conversation. Many bars and clubs will have live music as part of the city's love for music, and you will get cocktails to go with it as well, so it would pay to follow major live music gigs in the city around your time of visit.  Basically, if big and loud discos are your definition of a fun night then Essaouira only has a select few places for you. If relaxing nights with a beautiful scene and live music to partner up with your drinks is for you then Essaouira has no shortage in choices. So, When in Rome, do as the Romans do!

While visiting Essaouira there are some things you absolutely must do. These things you just cannot miss as they define Essaouira as a city different from any other.

There are many activities you can do while spendning time at Essaouira.

There are many Souvenirs to be found and bought in Essaouira.